The Bears of Haworth Cottage 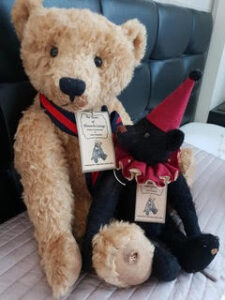 I am an Australian teddy bear Artist and have been making bears professionally since 1994.

I am mostly recognized for making large traditional antique teddies inspired by my love for the wonderful early German Steiff bears. I do make many different bears though including small ones, and other teddy companions such as Elephants, cats, Humpty Dumpties etc.

I have also designed a range of bears and gollies for an Australian soft toy company in the late nineties that were marketed extensively in the United Kingdom, Australia and New Zealand. They were sold under the Haworth Cottage label.  I am also very proud to have been commissioned by Australia’s prestige department store chain, David Jones to make five special handmade editions to celebrate their various anniversaries from 1997  to 2008.

In 1999 my husband and I developed and produced reproduction boot buttons, (teddy bear eyes) primarily to use in my own antique style bears. Recently I was asked by Steiff to produce a reproduction boot button for them using bio green materials. It has been a great honour for me to achieve this for them and to see my eyes being used by the company that inspired me to become a Teddy Bear Artist.  Margarete Steiff is very special to me.

It has been a wonderful twenty-seven years. Being involved in the  Teddy Bear collecting world has brought me many blessings and friendships all over the world. I have had five wonderful trips overseas because of them.

I will keep making my bears for as long as I can and as long as collectors want to add one to their hugs.