Hugglets was originally formed in 1985 by husband and wife team Glenn & Irene Jackman to create traditional teddy bears and toys designed both for children and for a growing number of adult collectors. In 1987, after a two-year foray into teddy bear making, Hugglets published the first edition of the UK Teddy Bear Guide which brought together the details of specialist manufacturers, teddy bear retailers and other related businesses.

The Guide was an immediate success and grew rapidly along with the market and a new edition has since been published every year at the 27th of October – coinciding with Theodore “Teddy” Roosevelt’s birthday.

In 1989 Hugglets organised the first British Teddy Bear Festival in London which drew together over two thousand collectors and businesses. The event proved so popular that Hugglets Teddy Bear Festivals have been staged annually ever since. There are currently two events – the Winter BearFest in February and the TEDDIES Festival in September – both held in London at Kensington Town Hall. In 2021 the Hugglets Online Festival was added as a replacement for the cancelled Kensington fairs during the Corona crisis. 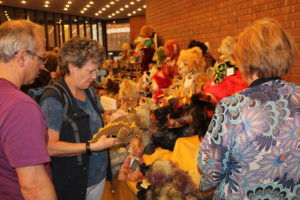 In 2017 Glenn & Irene decided to work towards retirement and Sebastian Marquardt with his Family, Partner Tom Wellhausen and a small team took the helm.

The one-day Hugglets Festivals attract around 1,500 eager teddy bear enthusiasts and are an inspiration for beginners as well as for established bear collectors from all around the world. There are 170 stands at each event selling both new and antique bears. Many of the exhibitors are individual bear makers (known as bear artists) who make bears in their own unique designs and style. Many bears are small limited editions or one-off creations. As many as 10,000 bears and related products are on sale. Prices range from just a few pounds to over £1000. There is also a resident bear repairer tending to injured bears.

On the 27th of October 2021 (Remember? Teddy’s Birthday!) the Hugglets Club for Teddy Bear Enthusiasts was introduced. It brings the bear community closer together and opens the door to an astounding variety of exclusive wonders.