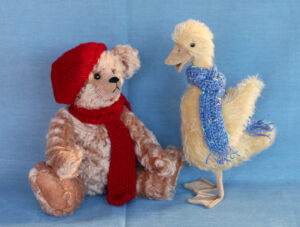 Heather is one of Australia’s earliest modern Teddy Bear Artists.

She is so excited to be part of the first Hugglets online show, having always wanted to attend one in person. It seemed like fate that her first-ever attendance coincides with her celebrating 35 years from when she created her first teddy bear.

Heather started creating bears in 1986 after previously being a cloth doll artist for many years. From the beginning, she has always created her own patterns for all her designs, which were made under the name of Bearly Collectable Bears.

She has always specialised in traditional bears, animals and character creations, invoking wonderful childhood memories from a time gone by. She prefers to make one of a kind pieces to give her collectors something unique and special. She loves to create in mohair and alpaca but also uses other interesting fabrics. She enjoys the whole process of creating her bears and animals, but it’s the faces she loves bringing to life. Designing the clothing for her dressed pieces is something she also adores doing.

Her work has been recognised with awards, including a perfect score of 100 with a fantasy wizard bear at the Australian Premier Bear Affair in 1995. She has been featured in magazines and books, plus she has bears in many collections around the world and in museums. Her popular Forest Dweller bears were once featured on television in Singapore some years ago.

Over the years, Heather has been a judge at many bear shows and also taught bear making.

After taking a long sabbatical from her craft, Heather’s inspiration resurfaced about three years ago, much to the delight of family, friends and collectors. These days she is only creating as a part-time artist, making her pieces even more treasured for the collector. Bears and animals are not the only things being created by Heather. She has also added stump doll animals, Gnomes and Christmas pieces to her repertoire, as well as anything else that comes to her imagination.

Her new creative journey also has a new name, so welcome to Creations by Heather.