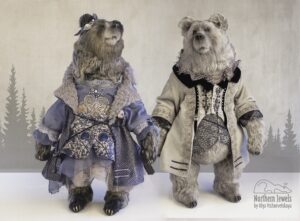 I’m Olga Vishnevetskaya – a teddy bear artist since 2014. My creativity found various forms of expression in the past until I discovered the magical world of teddy bears, and ever since I have been all-consumed with their creation. Over the past 6 years, I’ve attended exhibitions in various countries and had the honour of winning several awards, including 3 GOLDEN GEORGE Awards.

My inspiration comes from the colours of dark forests and cold seas, the northern lights and sparkling ice. These images translate into my bears, who are calm, serene and sometimes a little sullen, like true jewels from the Russian North where I originally come from. These ideas resulted in my brand name – Northern Jewels.

My bears are made entirely by hand using unique patterns. The creation of the bears involves certain techniques I invented over time, including the unique way in which I create an expressive gaze, which has become somewhat of a trademark for my work.

The bears’ outfits are the most important aspect of my style, and for me, they are a way of creating a unique image. Every pattern is made especially for each character. The garments are made from high-quality fabrics including velvet, silk and lace from brands such as Liberty, Sophie Hallette and Etro. Stones, pearls, silver and gold-plated details are used as accessories and finishing touches.