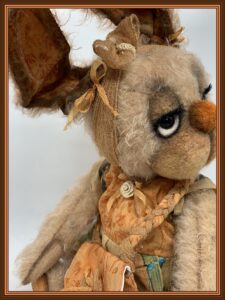 I live in a small town called Werchter in Vlaams-Brabant in Belgium. I live in a small street with my husband Johan, daughter Maya, mother Nelly and my shar pei dog called Sem. I also have a lot of chickens, and my daughter has a hangear rabbit… Inspiration for new designs, maybe? Our house is located in the area around a river with a forest. So we can go out on a good stroll with our dog.

Almost thirty years ago, I saw a beautiful doll in my sister in-law’s house (she is also my best friend). She had bought it on the market and invited me to go with her. So I then bought my first porcelain doll. Then we started looking where we could find other dolls. We found the doll and bear fairs from Niesje Wolters in Belgium and the Netherlands. When we first went to the great event in Rotterdam, we couldn’t believe our eyes. So many dolls and, of course, bears. After the first time, we bought our first bears from different artists and a kit for making a bear.

The first bear wasn’t what I had hoped for it to become… And I decided to collect bears from other artists. But after a few years, I couldn’t resist the bear virus and bought several kits with good descriptions, and the results were much better. After a while, my creative brain had to do its thing, and my first own designs were born. I sold them to friends, colleagues and on the Internet. After a few years, in 2009,  I made the step to the fairs! That was very exciting because I didn’t know if people would like my bears and other critters. But my first fair in Belgium was a real success, so I decided to do fairs in the Netherlands, Germany, and Hugglets Winter BearFest in the UK.

I like to make different styles of bears and other critters. I love to make the traditional ones, mostly with clothes and in all sizes, from 10cm to 50 cm or taller. But I also like to design miniature bears in a non-traditional style and with different kinds of materials. I love the variety in the styles I make. I also love to make elephants, giraffes, dogs, cats, zebra’s, donkeys, rabbits in different shapes and styles. For some reason, I have to make a few small ones and then a few bigger ones; then, I need to create another design… For a few years, I am using wool and creating needle felted mouths, noses, eyelids, etc…

Baermaking is a part of my life, and I hope that it will last forever!